The Death of the Democratic Party, and Civility 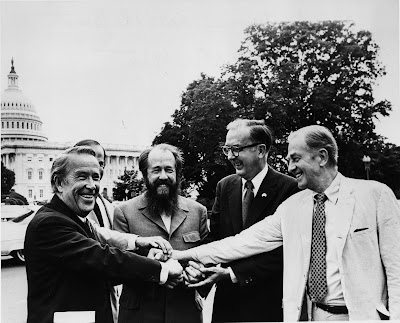 Friday night my husband and I had dinner with friends who are former urban dwellers but now live 50 miles outside the city. It's tricky to talk to anyone about politics, because even if you're talking to Democrats, some are so stark-raving liberal that it's impossible to find common ground. But even so, we found ourselves talking about the sad state of the Democratic party today.

Whatever happened to heroes like JFK -- or in our state, Senators Henry Jackson and Warren Magnuson? By today's standards, all of them would seem like Republicans. The Democratic party is now so far left that it alienates moderates from both parties. Why can't the DNC promote a candidate like Ben Nelson, Jr. Senator from Nebraska?

Right now there is a dispute over the authenticity of Washington State's newly "elected" Democratic Governor, Christine Gregoire. I'd voted for her in the past for attorney general, but none of us had voted for her for governor. The reason I didn't vote for her last fall was because of a missed filing deadline that occurred in the AG's office while she was at the helm, costing Washington taxpayers nearly $18 million. Gregoire attempted unsuccessfully to blame it on an assistant (which ended up costing our state even more money when she was found innocent) when she should simply have admitted the mistake. Why is it so hard for people to admit mistakes, anyway? Doesn't everyone know, ALL that people want is to find out WHO is to blame? Once someone takes responsibility, everyone is happy and can move on. Otherwise it necessitates finger pointing until the culprit is found. (In a similar vein, I'm convinced Clinton would not have been impeached if he'd just admitted to his dalliance with Monica Lewinsky!)

In any case, we moved on to the topic of civility and how nowadays many people seem rude, uncaring and self-absorbed. It's not caused just by the cell-phone phenomena, although I'm sure that's a contributing factor, but many people don't seem to care about good manners anymore. You can take someone out to lunch and you're lucky if you get an email or phone call acknowledging it. For some reason this kind of behavior is especially true of people under the age of 30. Maybe it's caused in part by the impersonal way we communicate. Email is great -- incredible even-- for staying in touch with dozens of people daily. But often there is a mindlessness about email, especially all of the forwarded materials -- much of it thoughtless, time-wasting, lazy and not even particularly amusing or informative stuff. The real killer is the email consisting of a message thread that goes on for five or six pages, and the ONE thing that pertains to you is buried somewhere in its midst.

I think part of what's causing the erosion of our society is the fact that in many, if not most, cases, there is no longer a stigma associated with behaviors that are bad. In fact, "bad" is bad -- you can't even really use that label anymore because it is deemed "too judgmental." So people can behave badly, and you can never call them on it.

When I was in high school, if a girl became pregnant she went away to a home for unwed mothers. Today you see pregnant girls walking the hallways, sometimes with their babies in tow. So things that once kept behavior in check are no longer in force, and the result is a society where people are unconcerned about how their actions are perceived by others, and consequently do whatever pleases them. Today I was talking to my husband about the weird teenagers and young adults who vow to remain virgins until they are married, and he pointed out that that used to be the NORM. They are now considered FREAKS!

Can things get more strange? I'm afraid so...

Photo from: http://www.libraries.rutgers.edu/rul/exhibits/case/page13.shtml
terrinakamura
I like people who are funny and smart. Kindness is good, too.