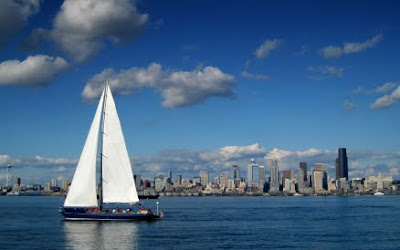 Okay, so I'm being melodramatic when I say it was the dinner party from hell, because it wasn't really hell. The people were nice. It was a beautiful day. We were able to enjoy an incredible view of Puget Sound outside on a deck.

The hell part was the dinner. But I'm jumping ahead...

Several weeks ago I received a dinner invitation from a long-time acquaintance. Because my husband and I like this person, we said we'd love to attend. In these parts, whenever someone invites you to their home for dinner, you will inevitably inquire, "what can we bring?" Nine times out of ten, the answer will be, "No need to bring anything, but if you'd like, bring a bottle of wine."

This time it went differently, though. A few days before the dinner, I received a phone call asking me to bring an "entree salad." As I was unfamiliar with the term, I asked for more clarification. Did it mean a salad that has meat in it? Or a chunky salad? Or something hefty? I was told any of those things would be fine, and to come at 5 PM, so I was left to my own devices to think of what to make.

Though my husband and I are on the dark side of 50, neither one of us are at the point where we want to be anywhere near dinner at 5 o'clock. Coincidentally, we had another stop to make in that part of Seattle that would delay our arrival until 5:30 or 6:00, which is still early but definitely more in the realm of normal for us.

We weren't told how many people would be there, so I planned to double whatever recipe I was going to make. A double volume of salad should be plenty to qualify it as an "entree," or so I thought.

My husband suggested I make a Chinese chicken salad recipe given to me by a former boyfriend's mother, an exceptionally talented cook of Japanese and Asian food. The recipe is labor intense, so usually the only time I make it is for Japanese New Year. It requires the individual preparation of many components, including deep-fried maifun noodles. When made correctly, the maifun blooms into an airy cloud once it hits the hot oil, yielding a light, crispy texture. The deep-fried maifun noodles really make the salad.

The day arrived and I began work. It was unseasonably hot, so my exasperation threshold was three notches lower than usual. The prep work is killer and takes hours. Trying to cut corners, I'd decided to use an electric fry pan instead of deep frying on the gas stove because it's less of a mess to clean up. Bad idea.

The electric fry pan didn't get hot enough. When I dropped in the maifun noodles, they looked right, but weren't light or crispy. In fact, they were mostly rock hard. If you can imagine chewing on threadlike bunches of greasy plastic, that would come close to the texture. My husband, who always finds the positive in every situation, acknowledged they were inedible. Without the maifun it would be an ordinary salad. I was beyond frustrated, so called our friend explaining I was having a meltdown. I was told not to worry if the salad didn't work out - that there would be plenty of food.

Having a safety net thrown, I started what I should have done in the first place - deep frying on the gas stove. When everything was finally complete, I packed it all up and we were ready to go.

We departed, making our other stop along the way, and arrived to find 10 people at the dinner party. We set down the chilled bottle of Prosecco and the salad ingredients we brought, and mingled for 10 minutes before asking for a beverage. Apparently because we didn't get there at 5, the hors d'oeuvres were not to be found. My husband was able to scrape some molecules of salmon off a remaining piece of skin, but that was it.

We chatted for another 15 minutes, then I was tapped on the shoulder and told it was time to serve my salad. So I went into the kitchen and asked if I should plate the salad or leave it in the bowl for people to serve themselves? I was told it would be fine to leave it in the bowl, so I proceeded to assemble all of the ingredients, toss it and set it on the sideboard. Meanwhile, another guest was slicing bread and setting it out. All the while I was wondering why someone wasn't firing up the barbecue? Certainly we were going to have some nice grilled salmon?

It was announced dinner was served. That's when I realised my salad was the dinner and THERE WOULD BE NO SALMON.

The salad was well received, but the other guests were equally puzzled. Should they leave room on their plates for more courses? My husband and I quickly discerned this would not be the case.

Ten minutes later when everyone was finished, the plates were cleared away. Meanwhile, another guest went to prepare their part of the meal, which turned out to be dessert. That was dinner: My salad, bread and dessert. I puzzled over being told there would be "plenty of food," and thought, "yeah, in a third-world country!"

At that point I excused myself and stealthily called our son, asking him to call me back in 15 minutes. When my phone rang, I answered and announced we needed to leave. My husband and I got into the car and asked each other what in the heck was that!? When we got home, we rummaged around for something to eat. We were hungry.

The next day I called a friend who was also a guest and asked what she thought. Yes, it was weird. After all accounting, we deduced everything served at the dinner was provided by a guest and that the hosts did nothing except provide a venue, glasses, dishes and utensils. One of the hosts was Jewish. I asked my friend (also Jewish) if it was a Jewish thing? Her response was, "NO, Terri! Jews feed people!"

So the next time we're presented with an invitation from this person, we're going to suggest dining out.