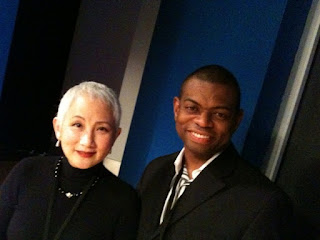 OK, I guess I was nervous about attending my first large-scale gathering of tweeps. It wasn't helped by the fact that the same day I had to wake up at 5 AM to arrive in Kirkland to shoot a CEO for an annual report. Driving on the east side is anxiety-provoking enough, but the thought of getting to meet—in real life—people from Twitter, had me feeling like a 16-year-old girl waiting for a new boyfriend to pick her up for a date!

The TweetHouse #140 Conference (#140tc) started at 8 AM, and I missed the keynote speech by Mashable's @BenParr, plus a few morning sessions. When I arrived I called my Twitter bud and Huffington Post blogger, @2morrowknight, to let him know I was there, but my call rolled over to his voice mail. So I went to the registration table where @sbroback (Steve Broback) and Kim Larsen introduced themselves to me, and I decided to grab a cup of coffee before venturing into the auditorium.

The place was packed. The room was dark. There were laptops everywhere and it reminded me of being at a University of Washington lecture hall. Looking across the room, I decided to walk to the left side to find a space. Spotting an empty chair, I sat next to @lindseym2 with Vittana (the startup whose t-shirts were worn that day by @scobleizer, @chrispirillo and venture associate @yush [Ayush Agarwal]). Then my iPhone rang. OOPs—I forgot to turn it off—but it was @2morrowknight!

He and I met outside in the lobby. The first pleasant surprise: @2morrowknight was not only handsome and elegant, but also charming and younger than I expected! We immediately hit it off and sat together for the afternoon sessions.

Since I arrived late, I caught the tail end of a panel discussion featuring @ShaunaCausey. Shauna was the person who told me about the conference and helped me sign up. It was hard to focus, though, because of my excitement about being there! And why wouldn't I? One of the first people I bumped into was @chrispirillo. He was adorable and personable and I felt like I was meeting an old friend, but for the first time. Imagine how cool it was to catch @BenParr, Chris and Shauna together? 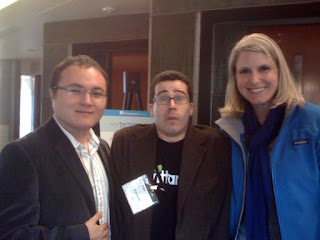 Second pleasant surprise: Other people I'd been tweeting with would say, "Hey, I'm following you!" And this is going to sound crazy, but it's probably the closest I've ever come to feeling famous! The pinnacle was when @dom (Dom Sagolla) came up and introduced himself to me, saying he liked my avatar and noticed my name in the streams. I said, "Don't you know my BTF, @krystynchong?" and he said that yes, Krys had just been to his house recently! When Twitter and real life collide, it's still a small world, after all! 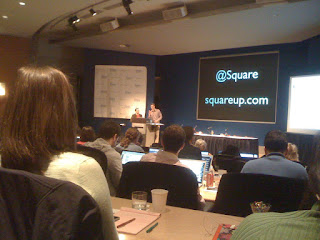 @chrispirillo introduced the afternoon keynote by @dom, one of the original creators of Twitter (pictured above). It was exciting, but also entertaining as well as illuminating, to get an inside glimpse of how the Twitter phenomenon was born. It was cool to see how the idea started as a sketch, and unfolded to become such a major element of so many people's lives—not only for individuals, but also for the vast number developers whose applications have been created to dovetail with and enhance the user's experience. @Invoker (Ryan Holmes CEO of HootSuite) @dacort (Damon Cortesi, creator of TweetStats and founder of United Startup) are two I had the chance to talk with. (For a complete list, click here. )

Final pleasant surprise: The tweetup at the Hotel Andra following the conference was a fantastic party. @seattlewinegal did a great job of assembling some fabulous wineries, and the Andra was a terrific venue. I had to make a beeline for @AndrewWill winery — one of my faves, but also enjoyed a tremendous Walter Dacon 2007 Appanage (@wdwines). The energy was palpable and it felt a little bit like #TwitterHollywood or #TwitterFanFest—just an amazing time.

The most striking thing to me was the friendliness exhibited by everyone, the level of fame notwithstanding. If you've ever felt like an outsider, it was the opposite experience at this conference. Tweeps are inclusive and all-embracing whether your following is 20 or 20,000. @zaibatsu (Reg Saddler) once told me Twitter is "the great equalizer," and based on this experience, I have to say I agree.

Postscript: Thanks to @kirste (Kirsten Mitchell) for taking the shot of me with @2morrowknight, and props to @sbroback, founder of The Parnassus Group, and @tweethouse (The Tweethouse) for putting together such an amazing conference. #140tc was one of the most fun events I've attended in my professional career, and I'm still thinking it was all a pleasant dream. :-)


terrinakamura
I like people who are funny and smart. Kindness is good, too.