CS5—A Pleasure to Meet You

I don’t think I’ve ever been as excited about a new software release as I am about the new Adobe Creative Suite (CS5). Two years ago a friend, one of the software engineers, told me they were working on some very cool things for this release. What an understatement! The new features are unbelievably awesome, and seeing what is now possible made me feel as though my head would explode.

The past two days I’ve been on the Adobe campus, learning about the main components in CS5, and today, specific presentations on InDesign. Why the focus on InDesign? Tuesday was the regularly scheduled bi-monthly InDesign Users Group (IDUG) meeting, which coincidentally took place the night before the “InDesignSecrets Print and ePublishing Conference” being held here in Seattle May 12-14. (For a complete list of speakers,) see: Speakers

So there were a bunch of heavy hitters in town, and we were lucky to have a few of them share some cool things with us. (Note, there are usually maybe 100 people who attend the IDUG, but there were more like 300 for this event. That’s a lot of Pagliacci pizza!) 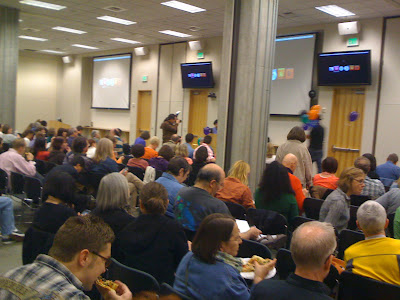 Monday, the awesome Colin Fleming, my favorite Adobe Application Engineer, did a fantastic dog and pony show for a small group of us, primarily covering InDesign, Illustrator, Photoshop and Flash Catalyst. Tuesday evening he reprised the material for a much larger audience and was met with resounding approval, oohs and ahhs. 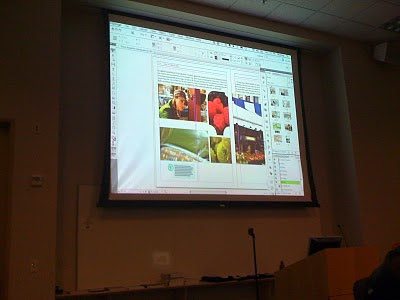 Just a FEW of the new features:

After a short break, during which my iPhone had a seizure and wouldn’t allow me to check in on Foursquare (will I ever earn a “swarm” badge? she asks longingly), a few of the conference speakers started sharing useful, fun and just plain WEIRD tips and tricks.

James Wamser, Senior Training Specialist with Sells Printing Company in New Berlin, WI, showed how custom-sized pages could simplify work flow. He started with a letter-sized page, then added a skinny .25” wide page, and then added a third letter-sized page, to form a front and back cover with spine. Normally, because the spine is an unusual size, the cover would need to be created in a separate document with the front, back and spine on a single page. A great tip he gave us was to save the spine-width page variables so they are there to select for future projects.

One of the weird ones was Mike Rankin, author and manager of work flow automation at Houghton Mifflin Harcourt Publishing Co., showed us how it was possible to make a rotated page by drawing a square, rotating it, then using a toolbar button to align the page to the rotation of the square. David Blatner took it a step further by showing us we could alter the square to a parallelogram, and the page would follow suit. Why would this be a good idea? Well, it wouldn’t. It would likely drive your service providers insane. But these guys are über geeks, so of course discovering and exploiting little known “features” really blows their skirts up.

He also showed a cool trick for making interlocking links. Users of vector programs know it’s difficult to pull off, but his workaround took only a couple of minutes. 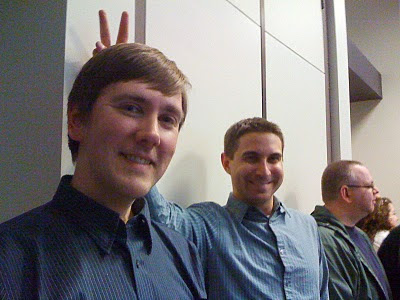 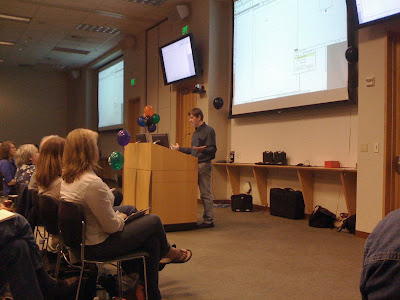 Basically, there are just too many exciting features to focus on any one in particular. The bottom line is, I’m waiting for my CS5 Design Premium  and hope it gets here soon!

One last note: There’s still time to register for InDesign Secrets Live, and last night we were given a code: IDUGS to get “early bird pricing!” (IDUGS)