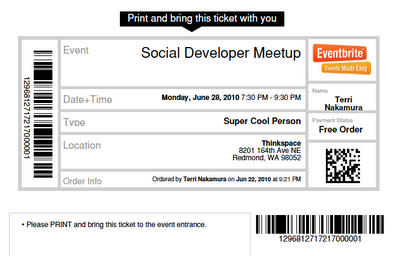 OK. When I got the invitation, it was a bit like, “WHY?” But on the ticket I was identified as a “Super Cool Person,” so how could I resist attending the Parnassus Group’s Social Developer Meetup? And even though one of my specialties is getting lost on the east side of the "pond" (Lake Washington), somehow I got there in spite of the dead battery in my GPS!

When finally I’d arrived, I looked around at the group assembled and wondered—what is this confab all about? 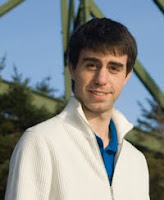 In describing it, Jason Preston (@jason_preston) VP of Strategy and Product Development at the Parnassus Group says, “Ever since we started putting together Twitter Conferences in March 2009, we at Parnassus have thought the next wave of digital innovation will be built by ordinary geeks on top of the rich and emerging foundation of social data platforms. All kinds of cool things are being built by local (Seattle) rock star developers on top of the available social application programming interfaces (APIs), ranging from Twitter to Foursquare to Facebook and beyond. So this initial gathering creates a place where people can learn from each other, share, ‘be technical,’ and socialize.”

And thanks to Peter Chee, ThinkSpace in Redmond, Wash., offered a great place to do just that.

First up was local star developer, and the very tall Adam Loving (@adamloving), creator of Twibes and developer at Vulcan and Foundry Group-funded “Gist.” He talked about how Gist uses Google’s Social Graph API as kind of a personal search-engine optimization to “pre-populate” user profiles.

How Does it Work?


This stuff was over my head, but as I understand it, Google’s Social Graph API makes available a person’s public connections using XFN (Xhtml Friends Network), which identifies human relationships through the use of hyperlinks; and FOAF (Friend of a Friend), a project that aims to create a web of links between people, the things they create, and do.

Because some users create public profiles but don’t always use the same monikers across networks, a hyperlink such as a url or email address can point to friends in various networks who might otherwise go unrecognized. The aggregated data is gleaned only from publicly available information. In other words, if your information is private, don’t worry—it won’t be found! (At least that's what we're led to think!)

By identifying human connections between people and their friends, Social Graph API makes it possible for social application developers to incorporate features for their users, which can make it easier for people to connect to public friends from one application to another.

Do you want to see a demo of the Social Graph API?

Enter some of your known urls and see what comes up. Interestingly, even profiles and accounts you have abandoned or renamed may surface here. 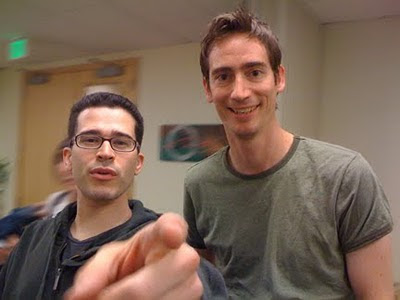 
During a short break, Jason, along with social media mega-star Chris Pirillo (@chrispirillo), tech expert to CNN.com, speaker, blogger, and founder of Gnomedex, gave us a demo of “FaceTime,” the face-to-face video calling feature of the new iPhone 4. It was cool to see, and like all Apple does, it was easy to use. The combination of gorgeous industrial design and functionality has me looking forward to leaving AT&T behind and forging a new relationship with Verizon come 2011. Have I mentioned Chris Pirillo is very smart, cute and funny?

Next we heard from Damon Cortesi (@dacort) of UntitledStartup and creator of TweetStats and TweepSearch, among other apps. He touched upon an array of interesting topics including:

Chirp Social Graph Analysis ("Chirp" was the first Twitter developer conference).
He shared an outstanding case study on the viral power of Twitter — the “pay with a tweet” social viral campaign—which shows how a French synthpop band went from zero to thousands in a matter of hours. Also, I think some of his graphs are beautiful illustrations of information. 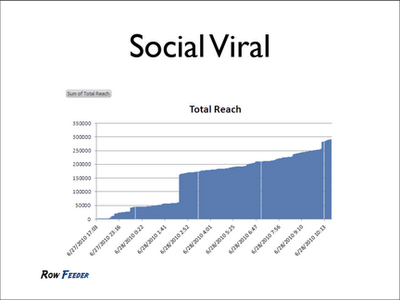 The “Social Viral” graph, illustrates the progression of what happened when a band called The Teenagers released a new song that people “paid for” by mentioning them in a tweet. Starting around 5 PM Sunday through 10 AM Monday, you can see how the tweets followed a gradual trajectory until someone with a big following tweeted it, and then BOOM—a huge bump. Says Damon, “The concept of ‘buying’ a song by posting a tweet about it has an inherent viral aspect and worked very powerfully.”

The next three graphs show the first 100, second 100 and third 100 people who retweeted. The larger circles show someone with more influence and the ensuing repercussions. (Color changes represent 500 more followers than previous followers.) A slightly larger example showing the viral spread can be seen here. (These gorgeous graphs were created using Protovis. ) 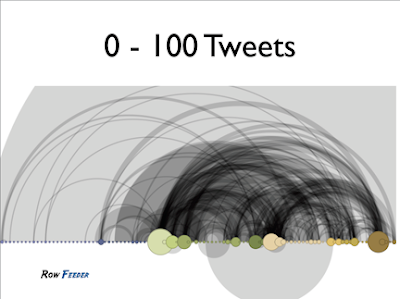 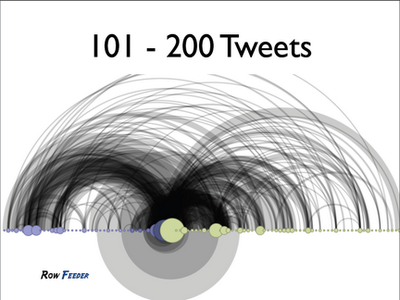 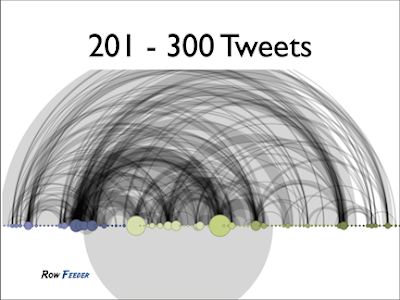 When I checked The Teenagers’ MySpace page on Saturday, I could see the "pay with a tweet campaign" is continuing, and when I searched the #PayWithaTweet hashtag on Twitter, I could see it’s still going strong both in the U.S. and abroad.


I had a chance to talk quite a bit with Adam Loving, a really handsome, lovely, articulate guy who is totally devoted to his craft. He was introduced as a local developer, but you know you’re really “local” when you recognize each others’ high schools!

He says he’s been working in his industry for 13 years, and his love of computing goes back to when he was a kid. Working part time with Gist has been great because it’s accelerated his ability to experiment. So at the end of 2009 he stopped working on the Twibes web site, and started working on some pet projects.

I asked him if aesthetics are unimportant when developers get ideas for applications because I’ve noticed a number of unattractive (or BORING) user interfaces out there. Says Adam, “Programmers who become entrepreneurs can have a fatal flaw — they have all kinds of technology at their disposal, but focus on “What solution I can create? rather than “What problem can I solve?”

So, in the process of "creating solutions," it appears an application's look and feel can be secondary. As a graphic designer, I find myself drawn to the applications that have the strongest combination of features and appealing user interfaces. Some sites that offer great comprehensive analytical feedback I avoid simply because I can’t stand the way they look. I don’t think I’m alone.

One final conversation with Chris Pirillo shed some light on the upcoming Gnomedex, this year being held August 19-21. When I asked him about the speakers he’s scheduled thus far, he told me the line up will probably continue to evolve, but attendees can expect exposure to controversy, technology and ideas related once again to the theme of “human circuitry.” He even shared a sneak peek at the new Gnomedex t-shirt design which included something that looked a bit like an iPhone 4 with a bumper!

Listening, watching and having the opportunity to talk with some of these brilliant guys was a treat.  And I know we'll continue to hear a lot about them in the coming months. 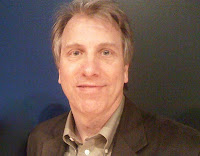 Special thanks to pioneering event organizer, author and cofounder of Thunder Lizard Productions, Steve Broback (@sbroback) of the Parnassus Group, for extending the invitation.

And Steve? I had a “Super Cool Time!"

Thanks to @justinjwilliams and David Horsfall for their feedback.