Through The Seattle Public Library 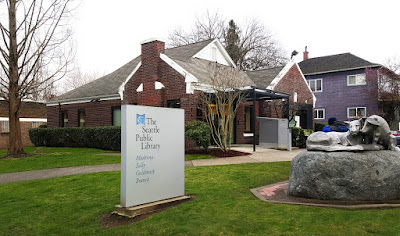 The Sally Goldmark Library in Madrona is our local branch.


Sometimes I think my husband, David, and I are the only people in Seattle who don’t subscribe to Netflix or Hulu.

I guess one reason why is, we aren’t huge consumers of video content and we'd regard it as wasteful to pay for something we won’t use.

We like watching films and television series, but since we opened Alki Surf Shop, we have even less discretionary time, including TV time. We spend an average of about an hour each evening watching films or programs.

Truth be told, we’d dearly love to "cut the Comcast cord," but there are certain channels that would be a bummer to lose, like Bloomberg News, and any channel that airs "Law and Order" episodes :)

The concept of getting rid of cable became more of a possibility when David discovered a treasure trove of content available through The Seattle Public Library (SPL). He regularly visits the SPL web site, and when he sees movies or TV shows that look promising, we "get it in the queue." 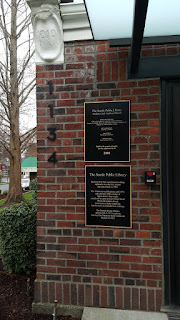 Built in 1919, our branch was a former firehouse


We’ve come to rely on SPL to supply us with most of our viewing entertainment. Most everything is available regardless of the original source, including new movies and exclusive programming like House of Cards, Game of Thrones or Orange is the New Black.

I imagine what we’re doing harkens back to the early days of Netflix. When we request movies and shows, we receive them in the order they become available. SPL notifies us when the media are delivered to our neighborhood library branch for pick up. You’re allowed to check out 50 items at the same time, so patrons can binge watch/read/listen.

I found some pretty amazing statistics about our library. Among them:

Thanks to the Seattle Public Library Foundation, and a $225,000 grant from Google, SPL now has 150 portable wifi hotspots available to loan to library users. Says city librarian Marcellus Turner, "Loaning mobile hotspots to people living without broadband access is another way The Seattle Public Library is taking our mission beyond the walls of our libraries and directly to our patrons where they are." 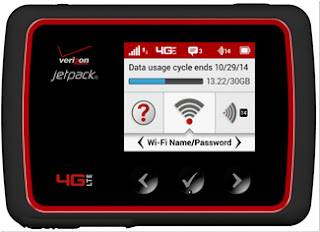 
It’s pretty obvious I’m a library fan, and I’m also proud to be a donor.

Seattle friends, if you value our amazing resource, I invite you to join me in supporting the Seattle Public Library!