My apologies if this one is a bit obscure. but those of us who use Photoshop and other software applications may be able to relate to “keyboard shortcuts.” 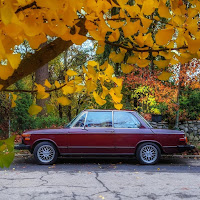 One morning I was walking around our house wondering where in the world I could find my battery tender. A battery tender, when hooked up to your car’s battery, provides a trickle charge, to keep cars ready to roll. They’re great for old cars like mine, (1976 BMW 2002) that sometimes goes undriven for a week or more. During cold weather, it isn’t surprising to find the battery is kaput.

Where is the battery tender? I wished I could hit Command-f (⌘-f) to “FIND,” which works pretty well on our computers. (Or “search” on our phones?) I know it’s somewhere around our house. How do I know? One reason — we don’t throw away things that are still working. The battery tender has never been used.

Our son and his wife @queenhorsfall came home for the holidays! He has been storing his BMW Z4 here. He is a U.S. Army Major, a former West Point grad, and has been deployed to some of the scariest places. (South Korea; Afghanistan; back and forth between Kuwait and Iraq). We're so proud of him though we've worried about him a lot!

He trusted us to take care of his car while on deployment. Even though it's a super fun car, I think we took it out twice for a spin while he was away. So when he came home he found the battery was dead. After charging it, I thought of the trickle charger. If ONLY if I could use ⌘-f to find it.

Finding things isn’t the only keyboard shortcut that would be great to use in real life. How many times have you wished you could “Undo” something?

Command-z (⌘-z), or “UNDO,” is one of my all-time go-to commands. Sometimes I accidentally do something I don’t really should NOT have done, but thankfully, if you just hit “undo," you’re back where you started.

I’ve wished so many times I could Command-z when I've been toasting crostini and forget they're in the oven. I can tell it's happened when the smoke alarm goes off.

In between house cleanings, I would love to ⌘-a or “select all” and use the “remove dust and speckles” feature in Photoshop. It would be so much easier than actually dusting everything. Or what about "select all" and "smart delete?" and then choosing “clean up?”

If I could use the “Clean Up By Name” or “Kind," it would organize everything in a snap!

And as for the battery tender? We ended buying another one. Sad!

Do you have any favorite keyboard shortcuts? Do you wish we could use them in real life?