So why the secrecy about AromaPlayer®? Their press release was embargoed until 5 PM today! (Jan. 3, 2023)

According to Kyoto-based tech startup Aromajoin, AromaPlayer is the only video platform capable of adding scent to your videos. Their value proposition is that engaging viewers by tapping into the sense of smell will create an even more immersive experience. 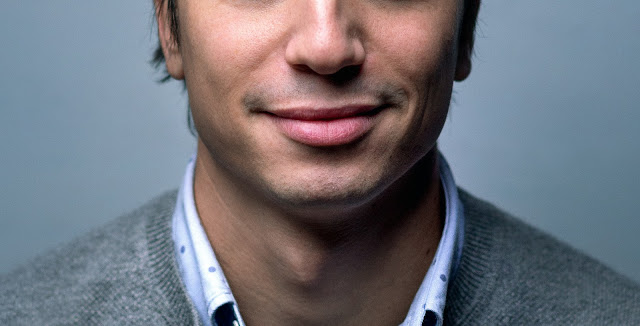 Olfactory experiences are influential in forming memories. Even though this sounds a little crazy to me, I can imagine it could provide a serious differentiator between competitors. If someone sees a commercial showing a delicious burger, the added influence of a great aroma to go with it could make it memorable and cause a viewer to jump on their scooter for a burger fix. Besides a strong point of difference, the experience of smell could enhance the image of a burger brand.

If you're like me, you're probably wondering how in the heck it would work. I mean, you go to a perfume counter to check out a scent, and three scents later, it's hard to recall the differences. Our sense of smell is overwhelmed and stops recognizing subtle differences. But what about consecutive aromas that are unrelated to each other? 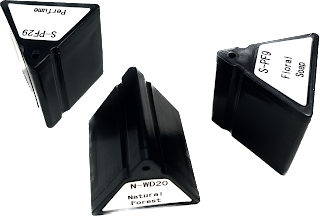 According to their literature, AromaPlayer's proprietary "aroma shooter technology device" can switch instantly between scents without delay or "leakage." (Oh, good!) I'm curious to try it. I'll add a postscript when I do.
To describe the basic technology, there is a housing that accommodates scent cartridges, working similarly to the way ink is handled by printers. Says Aromajoin: 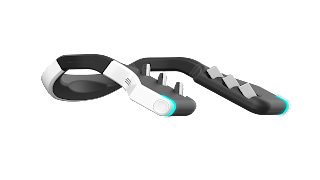 To emit a scent, the device first suctions ambient air, which then passes through the scent particles released from a cartridge to create the scent. It then sends the scented air directly toward the user's nose through its uniquely designed orifices."
The beauty of coming to the Consumer Electronics Show (CES) is meeting inventors, founders, and creators and seeing their products in real life. For me, it's rare to see a press release where the company explicitly says the information is "embargoed." It's a good strategy because it caught my attention and may lead to more buzz.
Maybe you'll be like me and want to smell it to believe it!

AromaJoin is presented by the Japan External Trade Organization (JETRO). You can check it out at Eureka Park, which brings together the most innovative startups with leading-edge technologies: 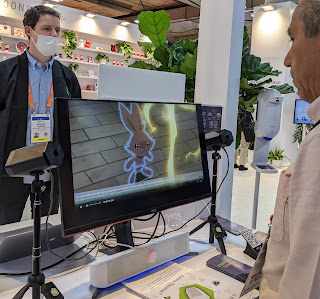 I spoke with Nicolas Quelin (pictured at left) at the Aromajoin booth in the Japan Pavilion at CES 2023, located at the Venetian's Eureka Park.

He gave me a demo of a video that emitted several fragrances, and it actually worked. The cartridges were mounted in a housing in stands positioned to the left and right of the screen. Depending on what was being shown, the devices would release aromas queued to points in the video. It's reminiscent of Smell-O-Vision scratch 'n sniff cards that viewers received when viewing the John Waters film, "Polyester," but more assertive. And because of the Aromajoin technology which uses solid fragrance, there isn't residual aroma leakage. There is a wraparound option shown above.
Cropped nose photo by Jurica Koletić on Unsplash
Find  Terri Nakamura on LinkTree
terrinakamura
I like people who are funny and smart. Kindness is good, too.