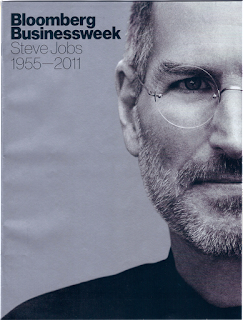 When I heard the news that Steve Jobs died Oct. 5, like everyone else who loves him and Apple, I felt a sick sadness in my gut.

I know what it feels like to say goodbye to someone dying of pancreatic cancer. A close friend and brilliant photographer, Jim Cummins, died of the disease. Toward the end he was very weak, but I had the opportunity to say goodbye and to tell him I loved him. There is a certain peace that came when I did. But when you admire someone from afar, it's not possible to express how much they mean to you. So when they die, people are left with an emptiness — grieving when one doesn't really feel they have the right—but grieving nonetheless.

Over the past two and half decades, much of my life has orbited around Steve Jobs, especially as more and more Apple products have interwoven into every waking moment of my existence. I go to bed with my iPhone on the night stand, and wake up to its alarm to check my email and calendar.

This blog post, dedicated to him, recounts a love affair that started in 1985 with the Mac 512K, and continues through a sampling of more than 2 dozen computers in my life over the course of the past two and a half decades, and all of which we still own. 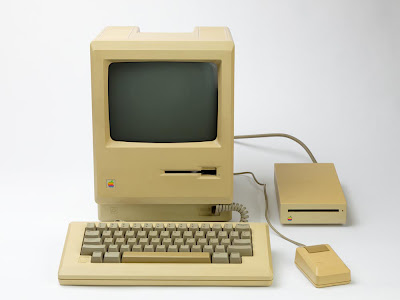 Okay…maybe "26-year love affair" is pushing it. The 512K sat untouched in its box for quite a while before my husband, David, opened it. As a hotshot copywriter in one of Seattle's most innovative agencies, he was among the first wave to acquire this cool new tool. But there was something comforting about his IBM electric typewriter, and it was such a hassle to learn this strange, new technology. As somewhat of a neo-Luddite, he entered the new era kicking and screaming, but like the rest of us, found himself embracing it.

My best friend, Paula, was working at a Seattle company called Aldus, which created PageMaker and Freehand and other applications for graphic designers. She encouraged me to start using a computer, but I was afraid. I'd had my graphic design business for 10 years, and used traditional tools like X-acto blades, T-squares, triangles, rapidograph pens and drafting instruments, and I didn't know if I could make the transition.

But in the late 1980s, I did, buying the first of two Mac IIci CPUs. The IIci was a bit spooky to seasoned Mac users because of the new "System 7" operating system. But since I cut my teeth on it, I didn't know anything else. Thus began my dedication to Apple. 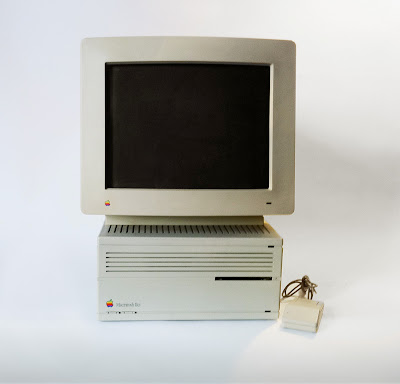 The "Power PCs" of the mid-1990s were supposed to be the salvation of our beloved platform with the licensing of the Mac OS to "clones." Having achieved a 10 percent market share, most of us felt good to think we would never have to "do Windows." But the market share fell to 3 percent in 1995 when Steve Jobs closed the loophole that had allowed other manufacturers to produce them. We all wondered—what was going to happen? 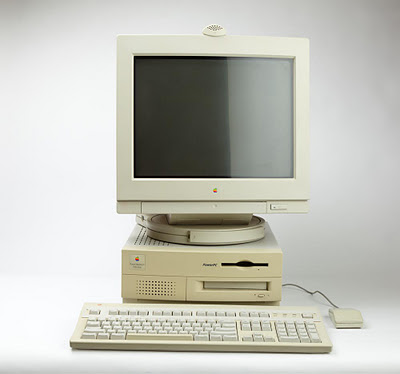 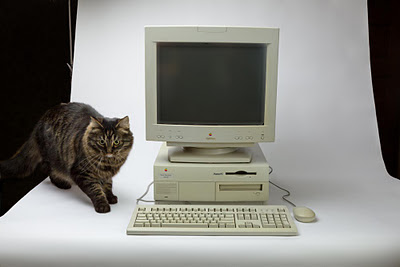 My cat, Hunter, jumping onto the set with the PowerMac 7300

The Microsoft/Apple alliance seemed to make strange bedfellows. Was the king of "the Evil Empire" (as my Microsoft friends referred to it) really going to save Apple? Steve Jobs said at the 1997 MacWorld Expo: 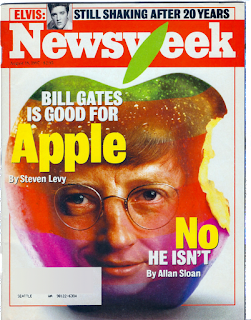 The issue of Newsweek,
explaining the new alliance between Microsoft and Apple.

"If we want to move forward and see Apple healthy and prospering again, we have to let go of a few things here. We have to let go of this notion that for Apple to win, Microsoft has to lose. We have to embrace a notion that for Apple to win, Apple has to do a really good job. And if others are going to help us that's great, because we need all the help we can get, and if we screw up and we don't do a good job, it's not somebody else's fault, it's our fault. So I think that is a very important perspective. If we want Microsoft Office on the Mac, we better treat the company that puts it out with a little bit of gratitude; we like their software. So, the era of setting this up as a competition between Apple and Microsoft is over as far as I'm concerned. This is about getting Apple healthy, this is about Apple being able to make incredibly great contributions to the industry and to get healthy and prosper again."


The G3 "Wall Street" PowerBook was a spectacular machine. Mine featured a swappable bay for a modular CD, floppy and Zip disk drives, so every medium was accessible. I took it with me on flights to numerous press checks in Oregon and Nevada. I loved seeing Carrie Bradshaw using one in Sex and the City. It seemed to make a lot of cameo appearances, probably because people making films used Macs. 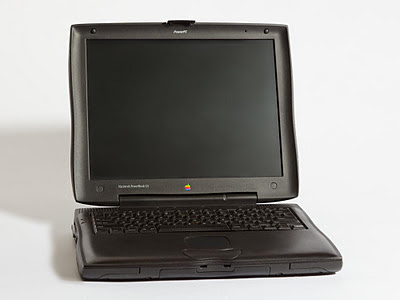 During the Apple Renaissance, from the late 1990s to early 2000s, products including the iBook and iMac—favorites of my family—were introduced. 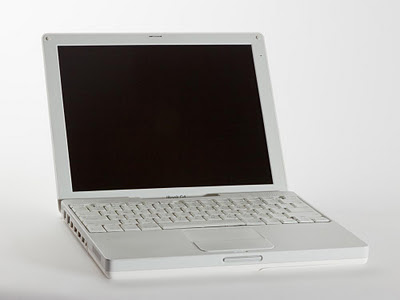 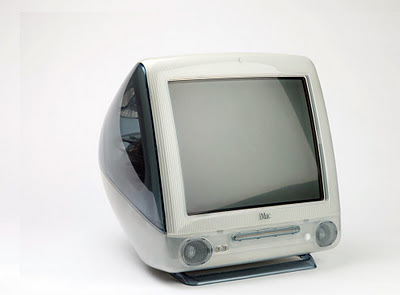 During the era of the iBook and iMac, the PowerMac G4 emerged. This model proved to be among the most productive machines in the office, and remained in use for a long while. A few years ago when one of my kids was taking Spanish, someone gave us an old version of Rosetta Stone Spanish for Mac. All of our machines were too new to run it, so we unearthed one of the G4s, installed the software, and it worked perfectly. 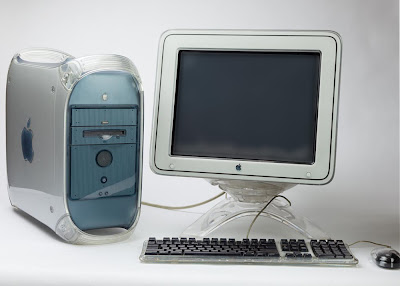 The G4 with Apple's craziest monitor

In 2003 the first aluminum-enclosed tower, the PowerMac G5 was introduced. As with all Apple computers, they were ideal for graphic designers. We eventually had two of them. One was actually a lemon and required rebooting 10 times a day. But it was the only Apple Computer in more than two decades that ever had problems. When we jettisoned it, it was liberating, like having a headache suddenly stop. The cinema display always worked perfectly, though! 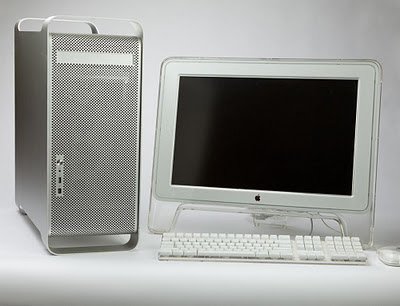 In 2007 a MacPro tower was added to the office, and is still used as a back-up computer. It is one of the best, most reliable computers I've ever used and it continues to deliver. Having two DVD drives in one machine is great. 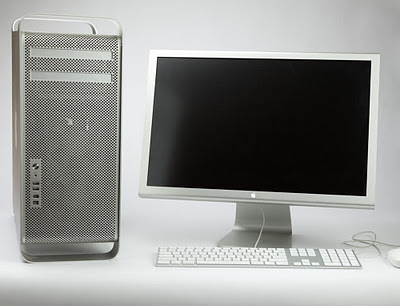 I used to scoff at iMacs for professional use until we acquired the 27" iMac. We shopped for another tower, but when considering the separate cost of a large display and CPU, the iMac started looking very attractive. It has been a fantastic addition to the studio. With all of processing speed, tons of real-estate in hi-definition, versatility and minimal desk footprint, I'm now a believer in the all-in-one for pro use. 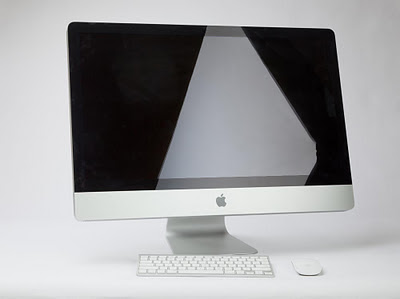 We've never owned stock in the company, but we've done our best to help Apple grow. My hope is Steve Jobs' legacy will continue into the next decade, with every new inspiration harkening back to its visionary cofounder.


Huge thanks to Seattle photographer, Doug Plummer who shot the photos for this blog post.

Information sourced throughout the web, including MacTracker , Apple and Wikipedia.